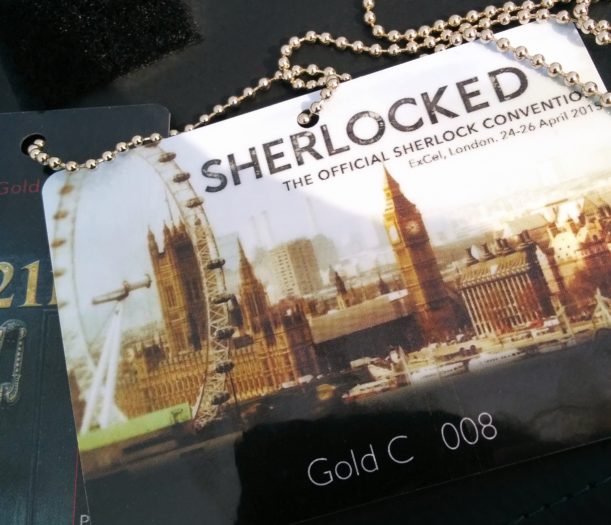 Where shall I start writing about an weekend that was stuffed with such a variety of experiences that still are not sorted in my mind – probably never will?

At the beginning there was this series on telly I fell in love with a couple of years ago. BBC’s “Sherlock” is a treat not only because of the extraordinary professionals that are dealing with bringing a modern Sherlock Holmes to life in our modern times. But it brings fans and crew together in a way that is fascinating and heartwarming at the same time.

Excited and scared at the same time
So when Sherlock the official convention was announced earlier this year, it soon was clear that fans started planning their trip to London – fans from all over the world. And when it finally was time to walk into ExCel, the exhibition and convention centre in London for registration and picking up some items, I – being a totally con newbie – was excited, thrilled and a bit scared. Excited and thrilled because I would finally meet Benedict Cumberbatch in real life, scared because I totally had no clue how not to behave like a idiot and not to fall over while waiting in the queue for my first photoshoot with a man I adore both as a brilliant actor and as a human being. When it was my turn to walk the few steps in front of the camera, I was totally calm and relaxed just because I looked at him while waiting. And although it was only a matter of a few seconds, I obviously managed to say “Good morning, so nice to meet you finally”. Obviously because Benedict looked at me (I mean those eyes!!) and saying “How are you? Nice to meet you, too” (that voice!!) he put his hand on my shoulder. Seconds later, the camera has fixed that moment forever, Benedict answered my “Thank you, have a nice day” with a “Have a nice day, too. Take care” and it was my turn to grab my pic, stroll outside, meet my best friends and other fans who smiled at me who had survived her first BenMoment ever.

A smile at the end of a long day
When I met Benedict for a second shoot inside the 221B Baker Street set, it was almost the end of a long day. He, sitting in Sherlock’s chair, looking tired, gave me a smile. “How are you?” “Tired, but fine. Has been a long day.” “Yes”, he answered and while I desperately tried not to fall off or into John’s chair, I realised Benedict murmured something like “Take care, the chair is very low”. Only seconds later I crawled out of the chair, hoping not to fall over my own feet and straight in front of Benedict’s shoes. “Thank you and all the best for you”, I stumbled, looking for seconds straight into his eyes, eyes that brightened (seemed that my voice was still functioning) while Benedict gave me a lovely smile “Aw.That’s very nice. Thank you. Take care” and I was out of the set again.

I have no idea how others went through these moments, how it was for them meeting Benedict and all the other actors. I found Benedict as lovely, nice, charming and polite as I ever thought he would be. And I respect him even more considering the fact that he must have met hundreds of fans in only one hour, maybe a thousand when the day came to an end. A day where I saw him on stage for a Q&A with fans and introducing a screening of Scandal in Belgravia that wrapped up my day, where he was funny, cheeky and a joy to watch and listen to.

Andrew’s yellow chucks
But there was a con world beyond Benedict, too. And it was thrilling and exciting meeting lots of the other actors. One of my highlights was Andrew Scott’s photoshoot and him signing my pic later. It seems he was really enjoying his time, looking straight at me when I walked over to him for the photoshoot, smiling and giggling as if he was meeting and old friend. A bright smile welcomed me later when it was my turn for getting Andrew’s autograph. “You left me a crying mess after ‘Pride’,” I said, causing him to look baffled at me. “But it’s all fine now that you are wearing yellow chucks.” “Yaaah, chucks are cool, aren’t they?” Andrew laughed out loud, smiled while he was handing my pic over.

Lars Mikkelsen who made me feel even more tiny at my photoshoot, seemed pleased and smiled when I said “The Team” hooked me. Una Stubbs greeted me with open arms and made me feel as we could have tea together instantly. Louise Brealey hugged me, asked when I was returning to Germany, ordered nice weather when she learned I had another day in London for strolling round the city (thx, btw, it worked perfectly) and left me with another warm hug, saying “Meet you on Twitter”.

Besides photoshoots and signing, I attended talks with Steven Moffat, Mark Gatiss, Lars Mikkelsen and Andrew Scott, watched a special effect show with Danny Hargreaves and unfortunately missed others. But I met lovely people literally from all over the world. People who were funny, kind, intelligent, interested in such a variety of things and very polite in ignoring my English. People who were friendly enough recognising me behind my Twitter account and started a chat and whom I hopefully will meet again online and in RL. People who are sharing the same love for a fandom which is able to communicate with quotes alone and which hopefully will stay a kind and friendly one.

Yes, this weekend was packed with a huge schedule and it was exhausting. But is was definitely worth it.