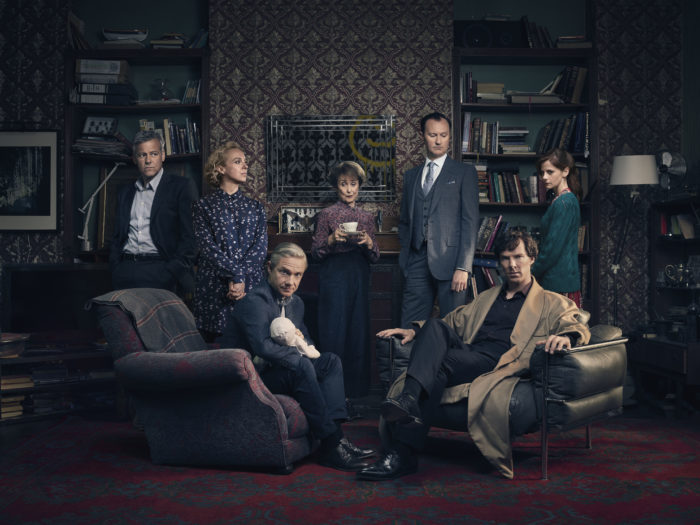 The new year brought new Sherlock. And as always  the fans gathered round telly or any internet device to watch the first episode of series 4, “The Six Thatchers”. Written by Mark Gatiss this episode started where we left the beloved figures at the end of “His Last Vow” (or is it “The Abominable Bride”?):  Sherlock, trying to fight his addiction, John and Mary, the soon-to-be parents, and Mycroft as dapper and clever as ever.  But of course there is the Christmas special “The Abominable Bride” that first aired last year, and despite the fact that the creators Steven Moffat and Mark Gatiss wanted us fans to believe it is a stand alone film, it isn’t. So aren’t the previous series.

That’s why “The Six Thatchers” is a totally new twist for the series as a whole and for Sherlock in particular. You see the only consulting detective in familiar scenes in flashbacks (confusing for newbies, a feast for fans) and you see him coping with new situations  and new figures – a baby only being one of them. Of course this changes him, it has to, just because Sherlock is human, no matter what he made anyone believe so far and  a very caring one as this episode unfolds. This doesn’t mean he stops being that high functioning sociopath (with your number). He is as rude and clever as ever. And he is more active in a James Bond-like way.

John Watson has changed, too, as Mrs Hudson predicted on the wedding day: “Marriage changes you”, she told Sherlock, and of course she is right. The couple has to care for their baby daughter while solving crimes together with Sherlock – the two of them against the rest of the world now are  three. And Mary? Well, she is smart and fits perfectly into Sherlock’s world. But you know what’s in the canon.

All in all this episode has anything you could wish for: humour, drama and settings with lots of details that clearly need lots of re watches to deduce all the hidden clues. Benedict Cumberbatch simply is Sherlock, he fits into the belstaff as perfectly as he fits into that iconic role, delivering a brilliant performance in every single second. Martin Freeman’s John Watson as well as Amanda Abbington’s Mary are more than just sidekicks. They are adding new lines to the story that set the path for the still unknown episodes to come. The week till episode 2 feels as long as the hiatus as a whole.