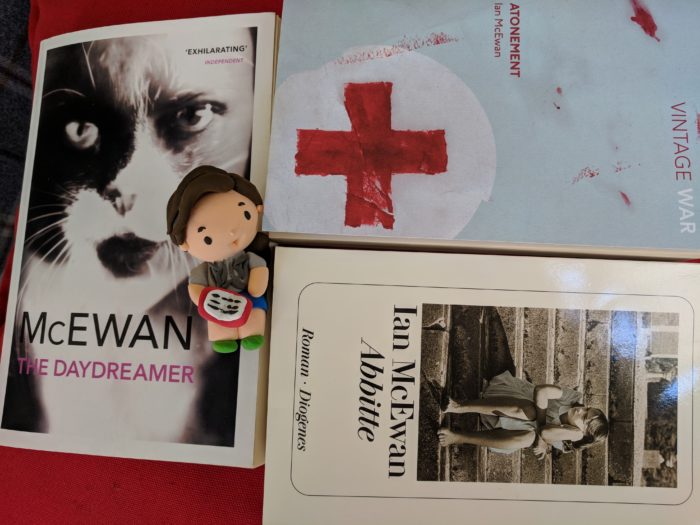 Frequent visitors of my blog (hello again if you are one) or those you follow me on social media especially on Twitter (hiiii, nice to meet you over here) know that I have a soft spot for the British author Ian McEwan ever since I stumbled upon the film “Atonement” and decided to read the German translation of the book (for those of you moaning: I got my hands on the English one later as well). It not only offered the opportunity to dive into the novel the film is based upon (and of course a certain actor named Benedict Cumberbatch) but also introduced me to an author I’ve never heard of before (to my defence I’m not British, although this isn’t a good excuse given the fact that his works are available in wonderful German translations published by Diogenes.) Being late to the party isn’t that bad in this particular case because I don’t have to wait impatiently for the next book to be published (of course I do) but instead in every book shop I’m happily strolling to the shelves where Ian McEwan’s works are sitting and pick up the one that is lacking on my shelf.

“They thought he was difficult because he was so silent. That seemed to bother people. (…) He liked to be alone and think his own thoughts.”

My latest one therefore is “Daydreamer” which followed me from Waterstones Piccadilly (one of my beloved places in London) and which I finished only recently. Although it is a small one, the book is a collection of short stories that are  connected through the main figure Peter Fortune. The ten year old boy is the daydreamer, a silent boy that prefers to be on his own, reading and imagining the stories in the book. But Peter not only is imagining the stories, he always is part of them and tells them from his point of view. So when he dreams himself in being the  old cat William, he literally becomes the furry animal that has lived with Peter, his sister and his parents ever since William has been a young cat.

“It was the oddest thing, to climb out of your body, just to step out of it and leave it lying on the carpet like a shirt you had just taken off.”

Eventually Peter and William the cat will change bodies again in the end which is a sad one. But the story – and the six others – are so well written and intriguing that you sigh with delight and relief because even if there isn’t a happy end, there is too much joy in reading especially this story and the other. And the only sad thing about Ian McEwan’s short stories is – that they are too short.