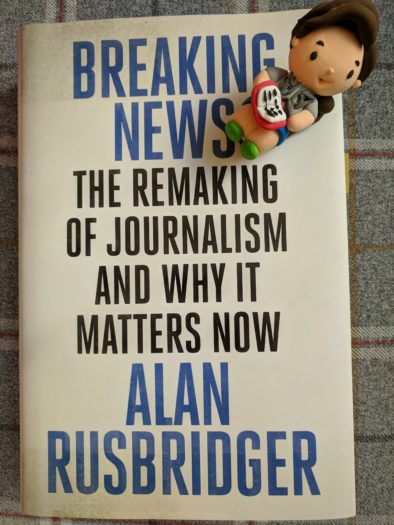 “Keep it short, keep it simple, write it in language you would use if you were telling your mum or dad.”

When Rusbridger left the Guardian after being its Editor-in-Chief for 20 years, he left an organisation heading towards a new age where the fear of shutting down the printing presses isn’t gone but has lost at least its fear that journalism would die with them. That is because Rusbridger isn’t only a brilliant writer but because he is guided by a decent, humble opinion about how journalism can survive in an age where fake news and mistrust in media and journalists is about to take over at least vast parts of social media. To understand Rusbridger’s thinking, you have to follow his career that started as a local journalist at the Cambridge Evening News, covering nothing but wedding reports. It was a time when journalists didn’t talk about business models (because they didn’t need to) but were aware of getting “the salient facts into the top of the story so, in haste, it could be cut from the bottom.” They lived (and local journalists still do) among the people on whom they reported. That closeness also bred respect and trust – Rusbridger considers as the most important values journalists (and their publishers) should hold dear.

To get along with the internet

Journalists and even Editors-in-Chief had to discover what that internet really was, where it lived (apparently somewhere in Silicon Valley) and how to they possibly could get along with it or “We were conquered” as  Rusbridger puts it, even if he, like most of his fellow journalists, had no idea what to make out of it, it was obvious that a  media organisation couldn’t ignore it. With the death of Lady Diana and later with 9/11, people were desperate to get information – if not by the Guardian, then from someone else. When the planes crashed into the World Trade Center, the internet couldn’t cope with the huge amount of visits on various websites. But like other websites (I remember vaguely that Süddeutsche Zeitung‘s site skipped pictures and went to text only), “The Guardian – with anxious tech developers sitting up all night – didn’t go dark.”

“We broke virtually no celebrity news or gossip. We tended to ignore people’s private lives. All this appeared – for our readers – to be a positive, not a negative.”

Maybe this was one of those moments, readers found The Guardian, liked it and came back. Not only for information from and about the UK but about world affairs and made it the leading serious newspaper English-language website in the world, made it “worthy”. Then readers came back for information about the Leveson inquiry into press standards and ethics and the Snowden revelations which won The Guardian the Pulitzer Prize for public service in 2014.

“Breaking News” is an inspiring and thrilling read for journalists who might find familiar thoughts and situations. For other readers it offers a brilliant read of journalism and media and how decent and serious information are made.

Alan Rusbridger: Breaking News – The remaking of journalism and why it matters now, Canongate, from £13.

You can find my blog entry about “Play it again” here.