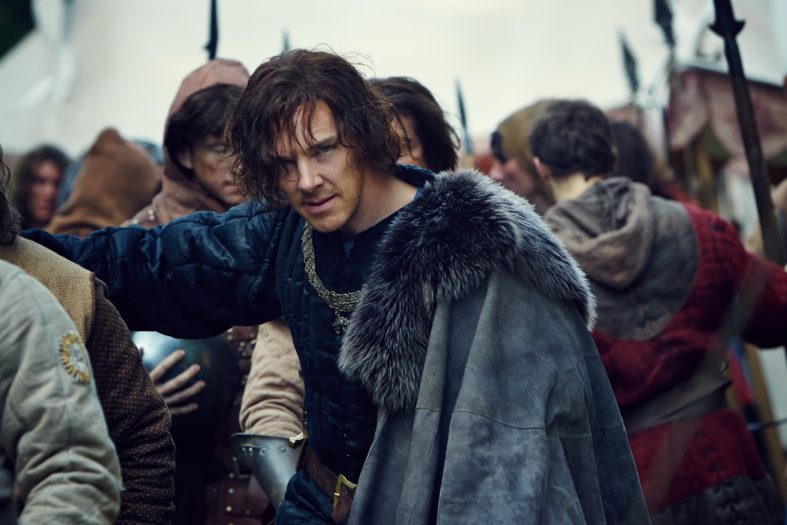 No, I’m not a Shakespeare expert. Far from that. Although I can imagine that reading his works might be the same challenge for native English speakers as it is for me reading Goethe or Schiller, getting the meaning of Shakespearian English is indeed a challenge. And it doesn’t get easier watching a play live on stage or a film version.

Unless you have a production team and a broadcaster that have the courage to  throw two hours of a 400 years old play on their audience, including lots of artificial blood, mud, ancient buildings and a very fine crew of actors to bring William Shakespeare’s War of the Roses to life. The second series of BBC Two’s Hollow Crown has all this. And it has a Benedict Cumberbatch whose Richard (soon to be King in the third episode of this series) goes all the way from an awkward but still nice ish teenager – his first appearance is all cheerful – to a cruel villain ready to climb on England’s throne, killing everyone in his way. We watch a young man who loves and adores his father who considers himself as rightful heir to the throne, a young man who from the very first scene always stands a bit aside, limping with a stiff leg and a hunchback – and is mocked for this and the fact that his birth apparently wasn’t an easy one, leaving him disabled into a world full of warriors.

As if this isn’t enough to harm a man, Richard is an eye witness when his younger brother is killed. His shock and fear is the audience’s because it is all written in Benedict Cumberbatch’s performance and we know that this is the final reason that turns Richard into the monstrous villain.

“And am I then a man to be belov’d?
O monstrous fault to harbour such a thought.” Henry VI 3, III,2

But it is not a villain that is totally disgusting and appalling. Richard is scaring, thrilling, seductive and – surprisingly enough  – funny and you realise you care for a man who admits all he longs for in the end is his brother’s crown no matter how many men he has to kill to reach that aim. But Richard is not only just bad. He’s a man who feels utterly alone since early childhood, a man who knows that he will not find true love because of his deformities.

If it is true that “Richard III” is one of the most demanding roles for any actor, it’s not for Benedict Cumberbatch. Because he brings every tiny detail of that character to life without any visible effort, leaving his audience speechless in front of the telly (or where ever you have the good fortune to catch this film), realising that you haven’t moved since two hours – except for opening your mouth in disbelief, murmuring “Oh my God” every once in a while and totally forgotten that you are watching a Shakespeare play normally considered as difficult stuff.  We don’t know if  William Shakespeare thought of a special actor when writing his play. But maybe you need a Benedict Cumberbatch to make a villain sexy.