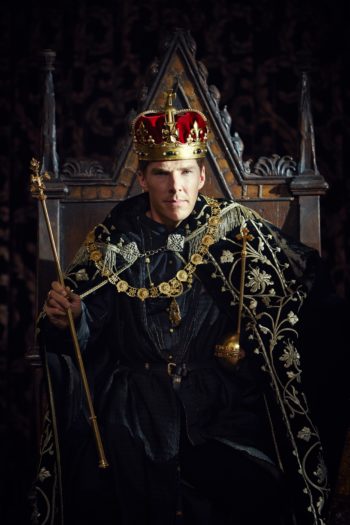 Yes, I can hear them. Those critics, those self declared grail holders of every single tradition you can think of in cultural topics. They are about to start their writing software after they had difficulties to survive  “Richard III”, the third part of the second series of “The Hollow Crown”, screened over the last three weekends on BBC Two. After a certain Benedict Cumberbatch got his hands on William Shakespeare’s “Hamlet” last year in London’s Barbican those purists had to endure beat after beat: People ran wild! Queued for tickets! Young folks watched a play live on stage for the very first time in their lives! How could that happen? And they still watch it whenever a live recording hits a cinema within reach.

And now it is Shakespeare all over again, three of his plays transformed into three 2 hours films, bringing the bloody Wars of the Roses into living rooms where the audience watched how a tyrant was made. A tyrant in the shape of Benedict Cumberbatch whose Richard III took over the screen  step by step in “Henry VI, 2” until he rules it completely in the defining part of “Richard III”. And he does so by luring the audience into his thoughts, his grief and his rage, leaving you wondering if you should be appalled by a cripple who is so terrible deformed or if you should feel sorry for a man who had been an outsider for all his life. The very first scene where Richard has one of his soliloquies speaking directly to the audience reveals not only his violent ambitions. It also shows that he is a vulnerable human being – naked upwards from the waist, a deformed back, a hand he can’t use – desperately trying to find his path where Richard is only true to his only ally, the audience, addressed directly to the camera in his soliloquies.

“I, that am curtail’d of this fair proportion, deform’d, unfinished, sent before my time into this breathing world scarce made up – and that so lamely and unfashionable that dogs bark at me, as I halt by them.” Richard III, I,1

All these different feelings, the cruelty of a man driven by ambition, hate, haunted by the ghosts of the men he killed are brilliantly performed by Benedict Cumberbatch who always is in control of the audience’s attention, who grabs their hands, takes them on a ride and leaves them crying for a king who died on a muddy battlefield. It seems that Benedict’s performance gets better and better with every new role. He clearly is on the height of his abilities, bringing every emotion you can possibly think of to life within the wink of an eye or the move of a hand. And of course his voice talking Shakespeare’s English –  making it vivid and just beautiful.

So may all of those professional critics analyse every letter, every scene, every move of the camera, may they shout at the BBC for tearing Shakespeare down to the small screen and may they shout at Benedict Cumberbatch for whatever reason they may possible find. One of his faults clearly is bringing a new audience to Shakespeare. If this is a fault, I can find more to blame this man for.