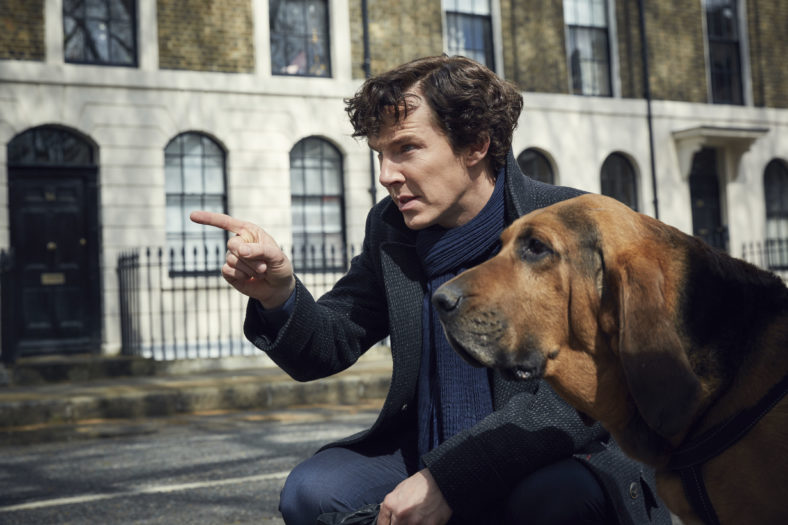 Over the last couple of years Benedict Cumberbatch gained lots of fans, especially women. Whether or not his wife is jealous of them,  the British actor, who in the last two years alone appeared in five films, reveals in this interview.  Additionally he  takes over the role as Sherlock Holmes on telly on a regular basis. The last episode of the fourth series aired on Sunday, 11th June on German broadcaster ARD.

Question: Besides your job you and your wife Sophie have to care for your two year old son Christopher and your new born son Hal. Isn’t this situation a bit too stressful?
Benedict Cumberbatch: It’s not stressful, it’s a blessing. It’s unbelievable that I’m offered roles at all. And that I am able to choose which one I want to take, that they are so different from one another and that people seem to like those films – this is something you simply can’t expect at all.

Have you ever imagined that the series would be such a huge success? What makes your version of Sherlock Holmes so popular?
I had not the faintest idea. Maybe it’s good we don’t do more episodes. Fans are more keen on what will happen and we do always look fresh and relaxed (laughs). Seriously, I do think that all figures in the series have their very special weaknesses or failures. The audience can accept them more easily.

The finale of series four is about to air (in Germany when this interview was first published). What was the best thing that happend on set?
Definitely Toby, the bloodhound of the first (it says “last” in the German version) episode. That damn dog wouldn’t move while filming because it turned out he hates asphalt and humans. He was trained in the countryside. It was a real comedy getting him to move.

As Holmes you almost have a romantic relationship with your coat (it says ‘cloak’ in the German version but you know about cloaks). Is there any private …?
… clothing I have an romantic  relationship? (laughs) Would be cool if I said I have a favourite blanket I’m carrying around since childhood, wouldn’t it? But there is nothing at all. My clothes are very boring, mostly one colour and I prefer silver, grey and blue.

Fans don’t think you are boring. You achieved cult status.
It’s something I never longed for. But it’s part of the job of being an actor.  Biggest problems I have with the pun some of my very intelligent, witty and creative female fans are playing with my name.

You’re hinting at the name “Cumberbitches” they gave themselves?
Yes, it’s a bit of self humiliating. I have made it quite clear that I would be more happy with a slightly different version of that name. But in the end everyone is free to decide which name to choose for oneself.

What about your wife? Isn’t she jealous of all the female fans?
Sophie loves me and is proud of my work. That’s all that matters. We are made for each other and fit together perfectly. That’s why she has no problems with all the stuff that’s going on. She’s a very strong and confident woman. I am a very lucky man.

How are you dealing with all the fame?
I ignore it and am trying to enjoy all the wonderful moments I can live through as an actor. It’s very easy to be dragged away by all the fuzz that’s made up around your person. That’s why it’s so important for me to have family and friends I know for a very long time. They keep me grounded.

You seem to be very self-confident.
Problem is self-confidence often is taken for arrogance. I’m a man with some short-comings.

That is?
Well, I do like tech gadgets but I’m not really good with them. I’m just an ordinary user who gets screwed up if something doesn’t work.

Do you always have your phone at hand?
Only for my job. Because I would loose out on all my appointments. When I’m at home, I don’t want to know anything of this.

What are you up to when you are at home?
First I’m changing into something very comfy. There’s nothing more wonderful than watching a great film crawled up on the sofa in front of your fireplace. But more often I’m reading a book. That calms me down.

Are you into sports?
Not in any studio. I like hiking in nature or walking through a park to clear my brain. Music helps me.

What is your favourite music?
Everything. Most of all I like songs getting me to think because they cover everything that goes wrong in this world. Just like Radiohead’s “Burn the Witch”. That songs touches my soul.

What should we do to make the world a better place?
It’s up to everyone to decide if or if not to make a difference. I’m working with an organisation called “Liberty” backing human rights in the UK. We’re trying to support people who are discriminated because of their origin, colour or religion.

You’re 40 now. Do you look back to your 20s nostalgically?
Not at all. The older I get, the happier I get with my life. I love my wonderful life, now more than ever, together with my family and the fantastic people surrounding me. I’m very much looking forward forward to what may lie ahead.

The German version of this interview was originally published online here.  My translation is published with the friendly permission of the author.

DieBedra > BBC > Benedict Cumberbatch: I am a very lucky man