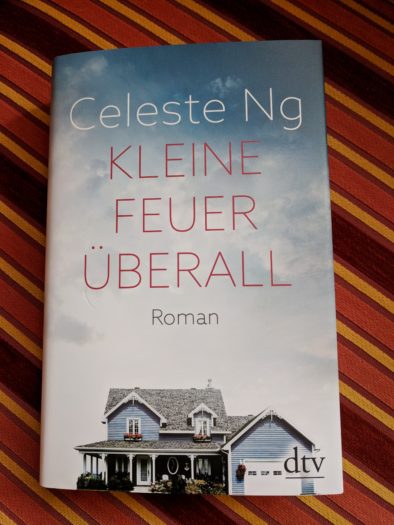 Celeste Ng’s new novel “Little Fires Everywhere” is just out in Germany where the American author has been on a press tour – and she found time to answer my questions.

In “Little Fires Everywhere” (as in “Everything I Never Told You”) your figures are living the American lifestyle, lots of people find attractive. But as the story unfolds, the facade crumbles away. Why?
Celeste Ng: One of my main jobs as a writer is to remind people that the world is complicated, that there are many facets to every situation and every person, and that there are many things we don’t know. So every story, for me, is about showing that there is more going on under the surface than it first appears. The idea of the “American Dream” is so powerful and so pervasive, but no one really lives it. It’s just not that simple, and even the dream itself is a lot more complicated and problematic than it seems. In the novel, I wanted to probe beneath that facade and ask readers to reconsider the whole idea of that “perfect lifestyle.”

Your figures live a modern life in the late 1990s. Do you think modern technologies should have a place in the life of teenagers?
Teenagers live in the modern world, so it seems foolish to try and keep them in some pristine past where modern technology doesn’t exist. We’re in the era of Spotify and Snapchat, but my generation looks back with nostalgia to the days of mixtapes and email, and our parents look back even further to record players and handwritten letters—so I think every generation idealizes what they had, and sees the new as a corruption.

With that said, though, what everyone—teenagers as well as adults of any generation — needs is human connection. By that, I mean the ability to understand and be understood by someone else, and to feel seen. Our anxieties about new technology is usually rooted in the idea that it’s increasing the space between each other, or between us and the “real” world. And that is something that I worry about. Sometimes modern technologies can isolate us—see: the anonymous and unpoliced boards of 4chan, for instance — but sometimes it allows us to connect with people in new ways, too. For me, the connection, or lack thereof, is more important than the technologies themselves.

What books are you reading and what books would you consider as a must read?
I just finished Pachinko, by Min-Jin Lee (which I think is coming out in Germany soon as “Ein einfaches Leben” [It will be available in September by dtv ). I’m currently re-reading The White Album, by Joan Didion, and reading Anna Karenina for the first time. As for must-reads: there aren’t a lot of books in this category, but books I think everyone would benefit from reading include Between the World and Me, by Ta-Nehisi Coates and the work of James Baldwin.

You find my review of the German version of “Little Fires Everywhere” – “Kleine Feuer überall” here.