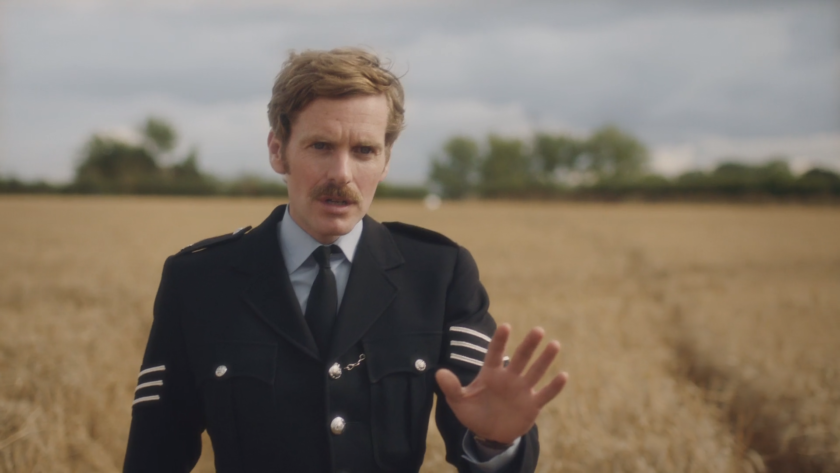 Yes, I wrote, I would love to watch and write a review. My inner self cringed and shouted fool at me. After all I just agreed in an email that I was willing to start a new series with their 6th season (and blog about it – what I did here and here – beware it’s in German). A series I had no or very vaguely ideas what it dealt with. I only stumbled upon it on German telly while zapping through channels or waiting for news or a magazine to start. My inner self rolled her eyes and sighed. At least “Endeavour” would be accompanied by “Wallander (German)” with Kenneth Branagh in the title role, she murmured. Yes, I agreed. I was very much looking forward to it. To Wallander.

When I finally gave S6E1 “Pylon” a try, I instantly knew I was at the right place at the right time. Like being a bit late to a friends’ gathering but nevertheless very welcome. Obviously the characters were haunted by events they had to face in the previous episodes. But thanks to the brilliant story teller that is Russell Lewis I never felt lost. I was hooked instantly (and am every since). And another fandom made its way into my life.

Each and every one of the figures were and still are very lovable, starting with Shaun Evans‘ Morse with a brilliant mind, a bit awkward but nevertheless adorable. Shaun brings that iconic figure to life and proofs that he is one of the finest actors around (and apparently a very nice human being).
Accompanied by Fred Thursday (Roger Allam) his boss and father figure, Reginald Bright (Anton Lesser), Jim Strange (Sean Rigby), Max DeBryn (James Bradshaw) the “City Boys” have everything I need to fall for them, to care for their fate. And of course for the women in their lives Winnie and Joan Thursday (Caroline O’Neill and Sara Vickers), Dorothee Frazil (Abigail Thaw) and WPC Shirley Trewlove (Dakota Blue Richards). Obviously I had to know more about them after I finished series 6.

After a stroll to a nearby store, I had all the previous series to keep me company for the next couple of evenings – and ready to be re-watched to find more clues and hints that hold the series (and as I learnt the original Morse- and Lewis-series) together.

The end of the beginning

While filming of the last series of “Endeavour” is under way when writing this blog entry, I know that something very dear will come to an end in the near future. An end that possibly will tear me apart and leave me sobbing on the floor (as have other beloved characters and series before) especially when they will reveal why Fred Thursday and his family are never mentioned in the original books or series. Because Morse has clearly wiped them out of his memory something shockingly disastrous must have happened, must it not?

DieBedra > English Version > Endeavour and how I fell for it