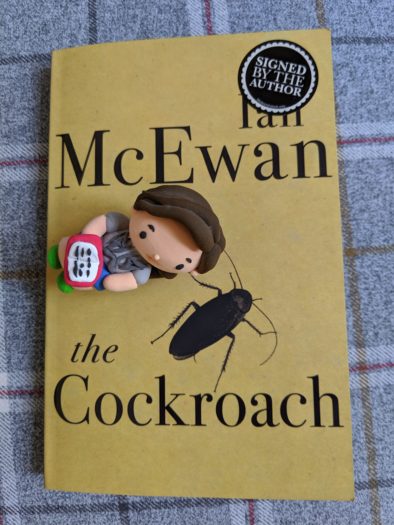 “That morning, Jim Sams, clever but by no means profound, woke from uneasy dreams to find himself transformed into a gigantic creature.”

There is no doubt that this very first sentence of “The Cockroach” is a nod to Franz Kafka’s “Metamorphosis” with its Gregor Samsa being transformed into a huge bug. But it wouldn’t be Ian McEwan if there weren’t more to discover in this novella that hit the shop shelves by surprise (such a surprise that Swiss publishing house Diogenes couldn’t manage to list it on their  website at first but will publish the German version November 27th).

“As the nation tears itself apart, (…) a writer is bound to ask what he or she can do. There’s only one answer: write,” Ian McEwan says on his website. And so he unfolds the story of Jim Sams who finds himself being transformed into the British Prime Minister who wants to carry out the will of the people whatever it takes. But unlike Gregor Samsa, Jim Sams is an insect, a cockroach, which somehow has become a human being. As it turns out Jim Sams isn’t alone to deliver “Reversalism” where the flow of money is reversed: workers pay their employees for being allowed to work but get money for shopping and Britain will pay other countries for their exports.

“There’ll be some bumps in the road ahead and we have to take the people with us.”

It is obvious that “The Cockroach” is a short but sharp and funny satire on Brexit and all the political chaos that it dragged along not only to the UK. You can’t help but smile, laugh and shake your head in a mixture of embarrassment, amusement and frustration while reading the small book happily discovering recent political developments, reactions and even quotes. With his second work this year, Ian McEwan proofs again that he is not only one of the finest writer the UK has to offer but also a political one that can’t help himself but make his voice heard.

You can find more about Ian McEwans’s book here.